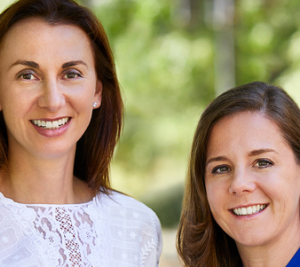 Effective 1 Jan GOJO Industries, the Purell hygiene brand maker, named Carey Jaros as CEO. We interview Carey about her plans to accelerate the growth of the 'Purell Solution', to holistically fight the spread of illness causing germs. Tomorrow 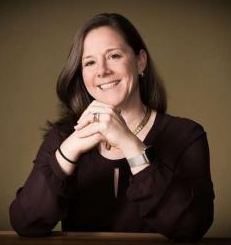 Current president Mark Lerner, who as a senior executive GOJO credits with helping it grow for more than 30 years, will become president emeritus and remain aboard as senior adviser, the company added.

Jaros (pic right) will be the second recent president of the 73-year-old company who is not a member of the Kanfer family, which still controls GOJO. The company is best known as the inventor and maker of Purell instant hand sanitizer products.

Jaros is no stranger, though, having joined GOJO in 2016 as chief strategy officer and transitioned to chief operating officer in July 2018, the company said in announcing her promotion. Prior to joining GOJO, Jaros was president of Akron's Walnut Ridge Strategic Management Co. and vice president at Cleveland-based Dealer Tire. She also spent more than a decade as a management consultant at Boston-based Bain & Co., a company release added.

Marcella Kanfer Rolnick (headline pic, on left) is currently GOJO's executive chair, a position to which she was named in May 2018. The company said she and Jaros have worked together and built a good working relationship, in what it described as a "years-long partnership."

"The two together make a formidable team," said Kanfer Rolnick's father, Joe Kanfer, in a statement. He took over GOJO in the 1970s and built it into the sanitation empire it is today before last year giving up his CEO responsibilities to coach existing management and serve as GOJO's "venturer." Kanfer also is known for being a venture capital investor in the U.S. and Israel.

"Marcella and Carey share my passion for innovation and pushing boundaries, and I look forward to continuing to work with both of them and their teams to lead the business successfully into an exciting and ambitious future," Kanfer said in a statement. 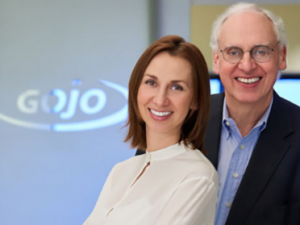 "Carey brings a rare combination of strategic perspective, practical business skills and real heart," Kanfer Rolnick (pic right with father Joe) said in a statement. "As president and chief executive officer, Carey will focus on continuing the company's progress as a market-making, growth-oriented business that cares about the well-being of people out in the world. … There is no one else I would rather partner with than Carey as we shape the future of GOJO."

The two women said they've become fast friends as a result of their careers at GOJO.

"Marcella and I have known each other since 2014, so five years, and we've been working together day to day since 2016," Jaros said in a telephone interview alongside Kanfer Rolnick.

Privately owned GOJO does not release financial information (ED. Estimated sales $500m+), but Kanfer Rolnick and Jaros said the company is doing well and continues to grow. The company occupied only two of the six floors of its headquarters when it moved to the site in 2000, Kanfer Rolnick noted, but today occupies nearly all of the building.

"GOJO is an incredibly healthy, growing company. I feel very fortunate to step into this role at a business that's in a very good place," she said